Most people’s holiday seasons are filled with family, food, drinks, and relaxation. Mine had some of that, but also included hysteroscopy, estrogen, moving, and bed rest. 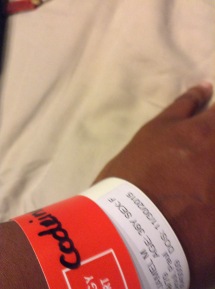 In short, I’ve been having issues with my cycle, and my RE and gynecologist both suggested going back to my surgeon to get a better look at what is happening. My GYN suspected Asherman’s Syndrome.

The Monday after Thanksgiving, I went in for a laproscopy and hysteroscopy. The surgeon did find some scar tissue that formed since the last procedure and removed it. He also found a tear that he repaired. I was put on a two month regimen of low dose estrogen (to be followed by 15 days of progesterone) to help restore my thinned lining. He also inserted a cook ballon to try to minimize scarring and adhesion inside my uterus. I had to keep the balloon in for 7 days. It was not the most comfortable thing in the world. I went the office the following week to have it removed. Having it taken out was uncomfortable more than it was painful.

The estrogen so far has given me headaches (the first week or so), and had my face broke out like I was 13. Right now, nothing major in terms of side effects, but the first two weeks…….

The procedure seemed to go pretty well, and I recovered well that day, but I didn’t bounce back like I thought I would. When I had this same thing done in 2013, I flew out to Atlanta the next day for work. Was I 100%? No, but I was at least at 75% This time, it took me about four days to feel back to normal. By the time I was feeling close to normal….it was time to pack up to move…to an entirely new city. I was limited in what I could do in terms of lifting, but I did move a suitcase that was a little heavier than I thought, and immediately felt weird. I knew I needed to sit my ass down and not lift anything. Which I did…for a few days, then I did it again. My doctor said I irritated the muscles in the pelvic area, take it easy.

I did….a little, but then it was Christmas. I had done no Christmas shopping, my mom was coming to stay with us for two days, which means I had to clean, and I had to cook my contributions to Christmas dinner. Which means, not much rest, but a lot of 800mg ibuprofen.

Finally, I was able to rest for a few days, and I do feel mostly better, after a month.

This procedure was important for me because this is the set up work to see if I can carry a baby. Aside from my left tube being blocked (not such a big deal), my lining is thin and my uterus is small. These things might keep me from carrying my own baby. I go back in April for another scope, to see if the hormones have made my lining thicken at all, and if having the balloon in for 7 days helped with the adhesion/scarring. As much as I try to downplay this as a minor procedure, it is a big deal, and I’m a little worried that all that I had going on immediately after the procedure may affect the final outcome.

We do this a lot, those of us who struggle. We don’t want to break down in front of those who know what we’re going through(or even those who don’t). We don’t want to admit the stakes even to ourselves sometimes in order to keep our peace and a little sanity. But, we need to. We have to come to terms with what is happening with our bodies and what is our options are.

The good news in all of this is: NO Fibroids were found! Two years fibroid free since my June 2013 Myomectomy.

View all posts by Jai